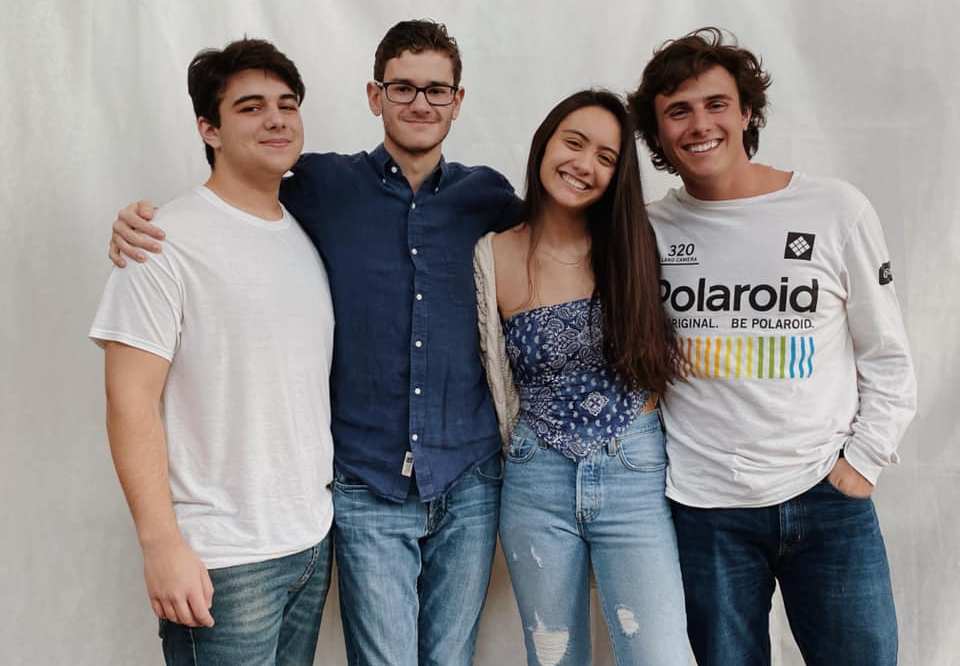 If you’re after a band that will help you lighten the mood and offers up a fresh new sound, then New Jersey band ScreenAge are the one for you. The quartet offer up an intriguing sound that fuses elements of alt-rock with neo-soul, jazz and indie.

The quartet hail from various towns around New Jersey, with Sam Novotny (drums, synth and saxophone) from Freehold, Alex D’Amico (guitar and backup vocals) from Milltown, and Joey Banwer (bass and backup vocals) and Emily MacMahon (vocals, guitar and keys) from Edison, and initially met at school a few years back.

As Emily explains: “Three of us met at a music school about five years ago, and we just clicked.  The whole idea was to find more ways to play and write music – only playing at the school was never enough. We wanted more. Eventually, I texted them and said  ‘Do you wanna be in a band?’ and ScreenAge was born. We’ve been playing and writing music ever since.”

Layered vocals take over in a heavier second verse, which feeds into another delicious chorus. Then a funky little effects-ridden guitar solo comes in over supporting guitars and drums, and drops into a final chorus that brings things to a lively ending – with a cheeky bit of saxophone coming in for good measure. Check it out in the video below:

On the track, Emily tells us: “Blue Eyed has been doing so well, and we’re super excited about it. We got over 1,000 streams in the first week, which got our total Spotify plays to over 10,000 in a year. We’re insanely happy about that. We’ve had the demo on our phones and been doing our own carpool karaokes with it for months on our own, so it’s amazing to finally be able to have it out for everyone else too.

“It’s definitely very different from the stuff we’ve put out before, it’s alt-rock but definitely more alt than rock. But this kind of sound is what we really enjoy playing, and most of the new stuff we’ll be putting out soon has this kind of feel as well.

“For anyone that hasn’t listened yet, definitely check it out, it’s the perfect song to start your summer to. Especially in these times, it’s nice to hear something new to remind you of what to look forward to, so we’d be honored to keep your ears company.”

We also love the sound of Crook, the opening track from their debut album Station 42. It’s a little heavier and faster, led by Emily’s delicious vocals and a big funky riff. Give it a listen below:

Probably unsurprisingly, the band have a wide variety of musical influences. As Emily explains: “All four of us have unique, but somewhat similar influences. A few weeks ago, for part of our Blue Eyed Addiction promotion, we made playlists on Spotify to represent each of our individual influences. You can find them on our Spotify page.

“In general, we try to base our music on artists like Hippo Campus and Radiohead, but some of the more nuanced aspects of our music come from less mainstream artists, such as Thank You Scientist or The Dear Hunter.”

And when it comes to what inspires them to write music, Emily adds: “Most of the time we write music because it’s just such a part of our nature, we can’t help it! We always end up jamming to a progression one of us came up with and rolling with it, and it’s just become second nature.

“When it comes to topics, it’s usually whatever is the ‘freshest wound,’ if you know what I mean. Whatever emotion is the strongest or whatever event is happening, that usually fuels the fire. Our last album, Station 42, was pretty much about everything our younger selves thought was important (which, looking back on it, the topics seem a bit cringe-worthy, but it’s a good way to see artistic development so it’s all good).

“Lately, we’ve been writing a lot about life and the different stages a person goes through. In fact, our first concept album/EP, (coming out later in 2020) will be exactly that -covering life stages from youth until the end. We’re really trying to branch out as a creative team and learn as much as we can about different writing processes.”

All being well, the band should have loads of gigs going on over the summer and have a new single ready to go once they’re able to get together again. They’ve also been busy working on YouTube videos and interactive posts to keep people entertained while they’re on lockdown.

As Emily explains: “We have a vlog series where we talk about everything that goes into the band and document how we function together and basically all the behind the scenes stuff that nobody really knows about. We have enough episodes at this point where you can binge-watch them all so if you’re into that you definitely should check it out. We just uploaded a video of us doing a quarantine birthday caravan for Alex so if you’d like to make your heart feel warm, we got you.”

ScreenAge are definitely a great band to check out if you’re after something a little different than your standard rock and metal.

And, as Emily adds: “If you’re looking for something in these crazy times to keep you grounded or hopeful, check us out. We’re honest, genuine people, and we play music because we have to – and there’s nothing else we’d rather do.

“Even if you’re not interested in the music, you can see into our lives in the vlogs and understand a bit more about a group of friends who are just doing what they love together. Definitely would be cool if you were also interested in the music though. Please stay safe wherever you are, we’d love to see you all again over the summer!”