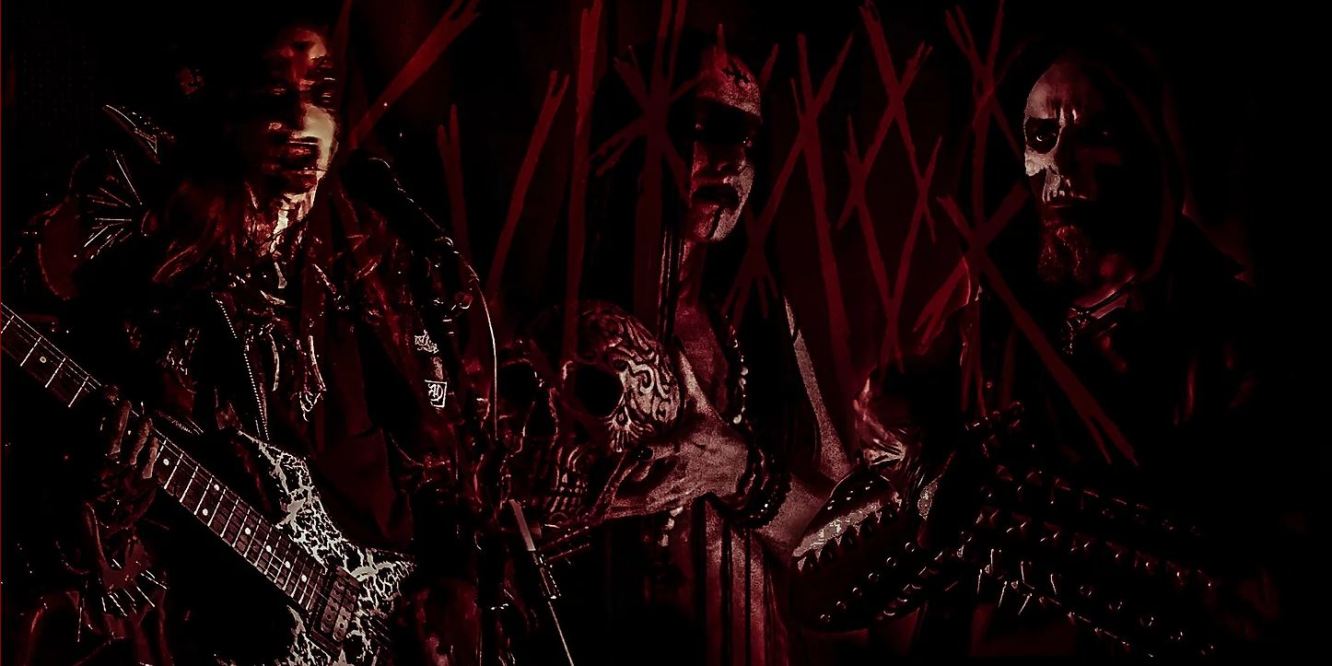 You often here people who aren’t fans of metal lazily denigrate the genre as “the Devil’s music.” Well, in this case, they’d be absolutely correct. The main source of inspiration for Russian band KVLTMOR is the Diabolica Quimbanda, a sinister Occult black magic tradition that dates back to the forgotten bowels of human history.

Indeed, the Quimbanda is a gift from the Devil to his followers that is “the radiant Light of Lucifer, the roar of Beelzebub’s Curses, the Ominous Silence of Astaroth, the seductive touch of the Red Goddess.” Or, it’s “Darkness and Light, Love and Hate, Life and Death, Peace and War.”

KVLTMOR is formed of Vargas Mor (lyrics, vocals and ambient music), Ugyldigråter (music and guitar) and Liselotte Toddermenschheit (bass, lyrics and public relations). As Vargas Mor explains: “Our triad is bound by an unbreakable bond of genuine love for black metal and what stands behind it. This was the reason why we United under the KVLTMOR flag.

“KVLTMOR took on a heavy burden to be a Herald Diabolica Quimbanda in order to bring blessing to the worthy and a curse to the pathetic.”

Or, as Liselotte puts it: “Everything happened in accordance with our aspirations and the will of the Devil. This happened exactly when it should have happened.”

The trio have honed a pretty intense and unique Quimbanda black metal sound that Ugyldigråter summarises as “frenzy, madness, anger” and Liselotte simply utters “Hail Horned God!” Describing their sound, Vargas Mor expands: “Dirty and rusty guitars, angry shuffling vocals, a barrage of devilish curses on the human race.” To which Liselotte adds: “Sounds from the Great Abyss of Anti-creation,” which basically summarises everything you need to know about the darkness of this intriguing band.

The band’s first official birth and first utterance of the Devil’s work is their first opus Salva Exu Mor, Salve Beelzebuth. It begins with eerie vocal sounds and chants, then drops into drawn-out guitars and kicks into huge drums under fun meandering guitars.

Some pretty terrifying vocals take over alongside big atmospheric guitars and driving drums, which evolve into huge fast-paced bass drum. The vocals eventually give way to an atmospheric instrumental section, then return before giving way to big screeching guitar sounds and a big solo over intense vocal sounds.

The pace suddenly increases with crushing drum rolls and faster, darting guitars supporting more intense vocal utterings. That drops into the drawn-out guitars and cool crashing vocal sounds as the track draws to an end. Check it out below:

More of a taste of the KVLTMOR sound is available in the 12-minute-long epic track Hail Ama-Lilith, Goddess of Gehinnom!. It features delicious plodding riffs under chilling echoey vocals, then somewhat more sinister vocals take over and the track gradually increases in intensity with huge rolling drums.

It suddenly drops into eerie quiet and echoey whispers, then explodes into a huge wall of powerful guitars, driving drums and crashing cymbals. Give this huge track a listen below:

Describing their musical influences, Ugyldigråter references Les Legions Noir for their guitar parts, which is a group of French underground black metal artists. While Vargas Mor explains: “Both in the ambient writing of our tracks and in the vocal parts I am inspired by the power that I glorify. This force in the cult of the Diabolica Quimbanda is called Exu and Pomba Gira. They are powerful messengers of the Devil. I praise them in my songs, dedicate every note, every second of my life to them. And nothing is more important to me than that.”

To which Liselotte adds: “The direction of black metal if we talk about music. If you look at it more broadly, nothing earthly has an impact.”

And when asked what inspires them to write music, all three simply utter: “The Devil.”

The band are one of the first we’ve featured from Russia and one of the first black metal bands we’ve written about on the site. And it’s safe to say they’re not overly complimentary of their local scene and, disappointingly, they’ve received very little support from home.

As Liselotte summarises: “Russian people have nothing. There is no good music or support. We are alone on this way of Great pitch-black. It couldn’t be otherwise.”

And Vargas Mor expands: “Russian rock is complete shit. Russian black metal is even worse. Here you can count the number of really good black metal bands on your fingers. Everything is done not for the sake of music but for the sake of self-promotion. There is no support. Only from close friends.

“Concert organizers in most cases make money at the expense of bands. In Russia, nothing is adapted for the development of our direction of music. On the contrary, everyone is against it. Most of all, people pay attention to us in Brazil. That inspires us because what I confess in my life and in my songs has roots there.”

There’s plenty more to come from KVLTMOR, who are currently putting the final touches on their opus XIII RITUAL. They’re continuing to work on new creations, have a video in the works for Hail Ama Lilith, Goddess of Gehinnom!, have merch incoming and are working on getting live rituals organised.

As Liselotte tells us: “We received proposals on performance this year, but the plague sent by Beelzebuth had other plans. By the way, it’s symbolic, because our first track was dedicated to Him. Anyway, we continue to work in our direction.”

Go ahead and tell everyone about KVLTMOR, but be aware that you do so at your own risk. Who knows, we may well have irked the wrath of Beelzebub himself by simply writing this article and describing the band’s odes to the Devil himself.

As Vargas Mor warns us: “Most bands performing music in our genre at this point would start drooling about the deepest power and other subtleties of the occult work behind their music, but this is nothing more than a way for them to earn money. We’d better be quiet. Anyone, who can hear, let him hear; anyone, who sees, let him see.”

And Ugyldigråter: “They will be responsible for listening to this material themselves.” And Liselotte adds: “If you are one of us, you already know everything. Otherwise, it is beyond of your comprehension.”

One Reply to “Introducing: KVLTMOR”