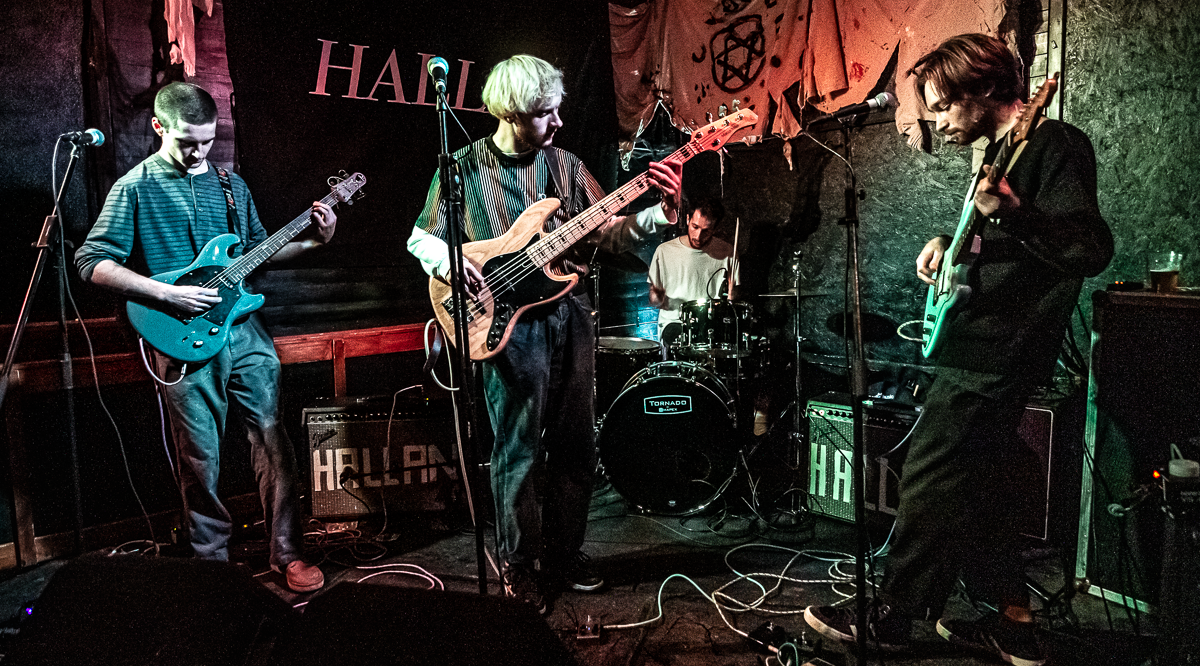 Fareham band Web were introduced to us as “Portsmouth’s latest and most aggressive post-punk band,” which had us all ears. The quartet have honed an intriguing sound that fuses a little bit of everything from experimental post-punk to grunge and heavy noise rock as they endeavour to work on “more interesting song structures.”

The band began when Lucas and Kristian, who’d been in a punk rock / grunge band for years, saw Black Midi’s secret set at End of the Road festival in 2018.

As Lucas explains: “From that moment we just went ‘Right, no more messin’ around, do it properly or don’t bother.’ Our other bandmates had left for Uni so we just spent some time together working in more interesting song structures; moving away from the verse-chorus-verse thing.

“We managed to get a couple of early shows with a rotating cast of drummers and bassists but eventually Ben got in touch through an ad I had put online. We bonded quickly over Swans and Nirvana and when I showed up some live Black Midi footage he was in. Kristian knew Josh from college and eventually managed to persuade him to join even though, up until that point, he was playing almost exclusively funk and soul covers I believe – he quickly came around!”

The result is a sound that Web describe as “intense, heavy and dark.” And Lucas expands: “Live it can be quite a dark, psychedelic experience. We like to chop up our songs and rearrange them and it all becomes one long song which I really enjoy about playing in this band. To wrap it up neatly I guess hard, experimental rock? Avant-grunge? Basically big rocky riffs and big vocal melodies but arranged in a more… exciting way.”

Bigger guitars and drums kick in alongside repeats of “I never threw it away,” which drops into an interesting little section of light, almost proggy guitars. A stabbing bassline leads back into a heavier verse with more intense vocals, before the track then suddenly ends on a quick blitz of lively guitars. Give it a listen below:

On the track, Ben tells us: “Crunchy guitars, punchy drums, unique vocals, janky bass and the build and release of tension. It’s our best effort at pinning down the fluidity of our live performance. Live, things happen that we can’t predict and we feel this recording really captures that. All the more reason to come see us live and experience it first hand with us!”

That follows on from the more experimental sounding debut single RMS Titanic, which you can check out below:

Black Midi have, of course, been a major influence on the band, along with Slint, on whom Lucas explains: “The atmosphere in their music is intoxicating and we strive to create a similar effect, albeit much more aggressive and heavy. I adore the brutality of the early Swans records where they’re just punching the bass guitars and whacking sheet metal and shouting. That’s viscerality to me, much more so than anything metal has produced in the last… however long, forever maybe! And Kristian, Ben and I are all grunge kids at heart so I think that’s where our taste for catchy vocals come from!”

And on what inspires their music, Kristian adds: “I write music to discover movement. In a band I have always worked on semantics of evil, the point seems to be to scare the audience. How can this go further than expected? How can these three guitars project an inconceivable sense of dread?

“Lyrics are just phrases that appear through melody influenced by the “new jam,” never write them down, might help you know…. key themes for me are not by choice, they arrive by passion. Dread, solitude, realism, brutal embarrassing honesty, fear, wrath, rage, violence, death, comedy, anguish, frustration, remorse. where’s the love? Simply, I write music to create a landscape of texture. It is much the same as painting abstractions.”

Web had plenty of exciting shows lined up pre-virus but they still have loads coming up. They’ll be releasing the Intimidation & Shame: Alternates & Remixes EP shortly, which includes a rock’n’roll remix their producer Tom Bell, Intimidation and Shame Part 2 and more.

And, as Lucas adds: “If you book us to play and supply a rider full to the brim of beers, lagers and cans we’ll be more fun but less good. The choice is yours…”