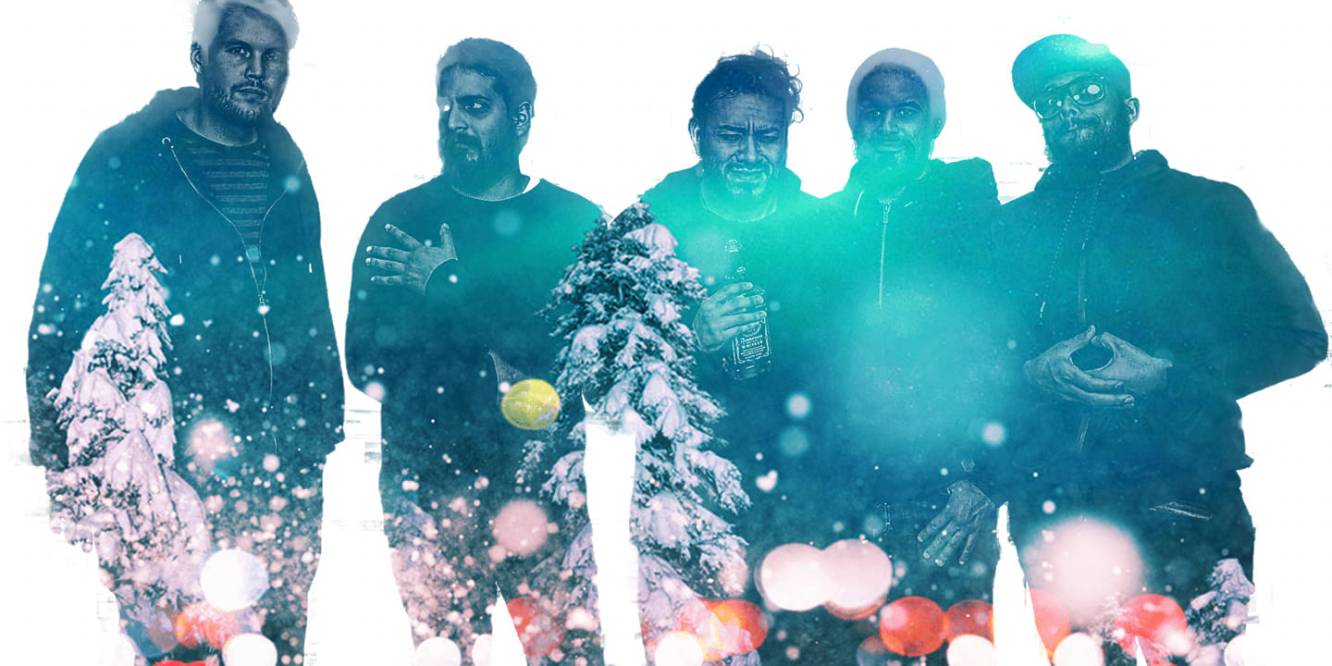 Long Island, NY rockers Karma Versa fuse a multitude of musical backgrounds and influences – including beginning life as an R’n’B band, which we’ll just about forgive them for – in their post-hardcore meets alternative rock sound.

The quintet of Oscar Nunez (vocals), Guilberto Garcia and Christian Seda (guitars), Bryan McDugle (bass) and Gerson Casillas (drums) first formed back in 2011, when they released a “sweeping, artful progressive emo” EP. They then reformed in 2017 after a five-year hiatus armed with a sound that’s as powerful as it is progressive and intense as it is intricate.

To get a taste for this they sent us Strawberry House, the opening track from their 2018 EP Merriam. It opens up with lively vocals over fast-paced guitars and driving drums that complement the fragmented nature of Oscar’s vocal delivery.

Huge cries of “Am I really that horrifying to look at, to touch” drop into heavier guitars under big screams. That feeds into the intense vocals “Now get to bed in our dungeon of sex torture. You’re never into it, you barely tried, and now its over, I hope you burn,” which brings the track to an intense ending. Give it a listen here:

This sets the scene for the rest of the EP, which is absolutely packed with intense post-hardcore goodness like the brilliant Brujeria and intriguing Futon. A particular personal favourite track is the huge Deity of Self Loathing, which sees wild screamed vocals answered by guttural retorts alongside big guitar riffs and driving drums.

You can, of course, listen to that on all streaming platforms, but this also leads us nicely into the band’s latest venture of live sessions on YouTube during the whole virus malarkey – of which Deity of Self Loathing is the latest offering. Check this awesome performance from last week out here:

We had a chat with the band to find out a little more about them. Read on below…

GR: Who are Karma Versa?

KV: “We’re from Long Island, New York. Gerson and Guil were friends from high school who actually were pretty much polar opposites. One into sports, one into film the two had a common love – music. In 2007, the two started playing with an RnB band. Later on in 2009 they met Oscar through Guil’s Brother, and the trio formed Karma Versa.

“They recorded Where Words Fail, did a few out of state shows, and took a hiatus later that year. The band came back to life in 2017 to write and record Merriam. In 2018, Bryan joined, and “Merriam” was released. The band started playing shows locally and out of state again, and in 2019 Christian joined. The rest is history being written.”

GR: You sent us Strawberry House. What should people be expecting from the song?

KV: “Strawberry House is a song that’s packed with energy. Expect big, driving rhythms and and pounding groove. The inspiration behind this song is seeing the cracks start to show in a marriage. Seeing this little mini empire you’ve built for yourselves, and watching your relationship disintegrate before your eyes. With that also comes the release of everything that you’ve pent up, which is actually beautiful in the end.”

GR: You also shared a live session with us, which looked awesome! What’s the story with those sessions?

KV: “We have been doing the live sessions since we can’t play shows right now due to keeping everyone safe and socially distant. We absolutely love playing shows, its probably our favorite part other than writing. We just kind of decided to take the time to make some cool stuff and share it with everyone while we all can.

“We have done these all in house and poured hundreds of hours into these collectively. We have put a few out, and we have a few left (although 3 of them are new songs that are coming out in the fall, so we’re not going to premiere them until around then).”

KV: “Our sound is a weirder post hardcore (not the chipmunky kind). The instruments play around the lyrics.”

KV: “Life in general inspires us to write music. The first EP was about marriage, the second about drugs and divorce. The songs we’re releasing soon go into witchy stuff, self love, feeling enamored again, and overcoming terrible things. Also we all really just love music, like to a fault!”

KV: “We just wrapped up recording at Westfall in Farmingdale, NY. The album is yet to be named, but the content is complete. It will come out in the early fall. Currently we have a couple live session videos to drop, as well as an official music video for Hempstead off our upcoming release. We’re constantly writing and have a couple new ones that will definitely be ready by the time shows start up again.”

KV: “Our music can go into some weird emotional places, but at the end of the day it feels good to release whatever has been plaguing you. So we invite you to come and celebrate life with us by giving you a chance to let it out. We just really love people, and that’s what this whole journey is about. This music is our way through it.”