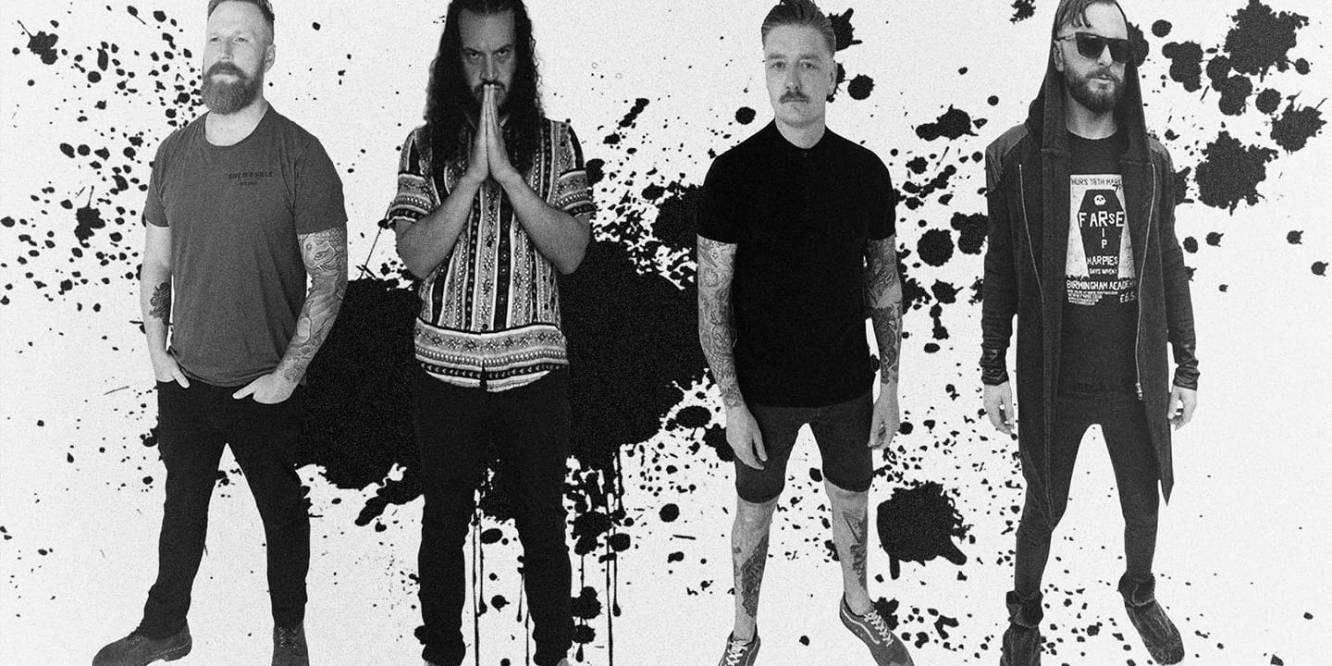 Exciting Birmingham band The SchytëHawkës take the heaviness of hardcore and thrash and supplement them with intoxicating hip-hop vocals. The quartet have honed a sound that’s heavy, in-your-face and offers social commentary with a refreshing tongue-in-cheek approach that they describe as “agitated urban noise” or “punk thrash rapcore.”

The quartet of guitarist and vocalist Kieran Moloney, vocalist and MC Carl Hewitt, bassist Peter Fisher and drummer Leo Crabtree first formed back in 2016. However, the sound we’re introducing you to was born when the band invited Carl, who is also a hip-hop artist under the moniker of Ignoramuss, to record with them.

As Kieran explains to us: “The origins date back to late 2016 when I shared some demos with Peter and Leo, making a plan to knock them into shape and record in early 2017. Around this time, Carl’s dad passed away and, to try and take his mind off the situation, we invited him down to record a few bars for us. That track was A Mexican Werewolf in Birmingham and, although it never made it to our debut record, it gave us the blueprint for our sound today, with the rap vocals becoming a key feature rather than a supplement.”

The band then released debut record, the five-track EP Neck of the Woods, last May. They’d planned to take the record out on tour but Leo couldn’t commit to gigs so they delayed it until early 2020, only for the pandemic to put that on ice. However, that did send the back into the studio, which resulted in brand new track Centipedes that was released last month.

It opens up with interesting choral opening vocals “I can feel them crawling over my back, A mass of centipedes, Looking for a soft spot to be extracting viciously,” which drop into heavy guitars under Carl’s rapped vocals. These continue into a heavy chorus of fast-paced vocals over driving drums and guitars.

Another rapped verse gives way to heavier guitars under more fast-paced vocals, then drop into drawn-out guitars that give us a little pause for breath. But a building scream gives way to another little rapped flurry then repeats of “And I feel them all over my skin” over building guitars gives way to a final blast of the lively chorus. Check out the track and its awesome lyrics in the video below:

On the new track, Kieran told us: “Centipedes is a great advert for our sound, a song that should make people want to smash something (but in a positive way!). It showcases our heaviness, our raw punk aggression and our lyrical direction. The song is about the grip that social media and the tech giants have on the unwitting, with the Centipede the metaphor for the extracting of vitality from its prey.”

As mentioned, the band’s debut EP launched last year and was led by the track Split the Dog From the Mange. It opens up with a lively rapped verse suported by big guitars and driving drums, which feeds into big shouted vocals. Second time around it drops into stabbing guitars that continue under distant spoken vocals then explodes into a huge smash of vocals over driving drums and guitars, then fast-paced rapped vocals. For it, they produced a brilliant video that features a “wronged man turning to demonic summonings to administer justice.” Check it out below:

While a personal favourite track from the EP is the lively Crowns, which dives straight into chugging guitars and rapped vocals with a cheeky cowbell clanging in the background. Big thrashy guitars bridge into a heavy shouty chorus and feed into another rapped verse supported by cool high-pitched guitars. The second chorus ends on drawn-out guitars, then a rumbling bassline is supported by the return of the cowbell as building vocals give way to a completely different section of clean vocals answered by fast-paced rapped vocals. Give it a listen here:

And we firmly recommend giving its lively, thrashy closing track Bass Camp at Mount Thrashmore a listen, which features the line “well if you will have a wedding in the arse-end of Redditch, the owner of the venue is bound to neglect you,” which we particularly enjoy having been to dodgy weddings in the ‘arse-end of Redditch’ ourselves.

The SchytëHawkës’ sound is influenced by everything from Metallica, Slayer and Pantera to The Bronx, Comeback Kid, Suicidal Tendencies, Cancer Bats, Madball and Machine Head, as well as UK bands like Farse, Skindred and Gallows.

And on what inspires their music, Kieran says: “Many of our songs tackle the subject matter of the human race becoming stupider and more narcissistic in one way or another, with abstract and ghouls and goblins fare of the punkier vocals supplementing the more cutting and sardonic social commentary of the rapping. We do,, however, put big emphasis on fun and some of our messages are delivered with that aforementioned tongue firmly in cheek.”

We’re loving what we hear from the band and the good news is that there’s plenty more to come from The SchytëHawkës. Centipedes is the first track released from a new EP entitled Streets of Rage, which will be released in the next few months. They also plan to hit the road on the UK gig scene to support the release.

As Kieran tells us: “The EP will feature our trademark punk aggression turned up a notch with some more emphasis on progression of our other influences… we can’t wait to unleash it!”