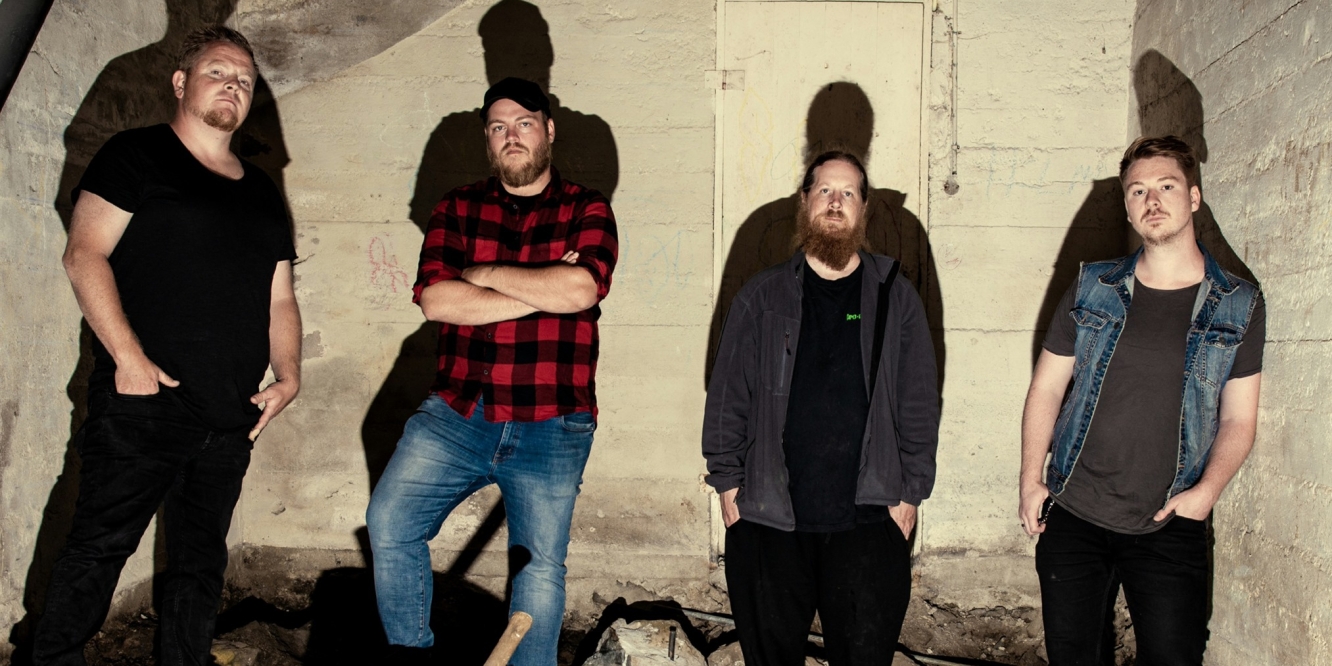 The Flekkefjord band first formed when Tor Vidar Rennestraum (vocals) was asked to play a show in Kvinesdal. He recruited Lars Frøsland (guitars) and Erling Andreas Gundersen (bass), who were later joined by Jan Aril Edvardsen Moi, aka Kniksen Jr., (drums) as they went from playing cover songs to working on original music.

And the sound of that original music makes us very happy indeed that they gave up on doing covers. They sent us their third single Flames which, as the cool kids these days would say – or actually they’d probably emoji it -, is indeed “Flames.”

Flames opens up with a cool stabbing guitars then a little flurry of higher notes, then the stabbing guitars continue under Tor Vidar’s engaging vocals. That feeds straight into a huge catchy chorus “Flames coming down, From heaven above and up from the ground, Flames.”

The second verse features almost spoken vocals “I’m the king of madness, I’m the king of the sand, I’m the king of everything, Crawling under your bed, I dare you to come closer, I dare you scream out my name, Scream little darling, Scream as loud as you can” that feed into another huge chorus. A little guitar solo takes over, then cool stabbing guitars segue into an even bigger final rendition of the chorus.

Check out this awesome track in this raw studio footage video, in which I love the guys behind the glass’ reactions to Tor Vidar nailing his vocals.

That followed second single, which is also called King Romeo and may well be my personal favourite of their tracks. It opens up with cool guitars and a fun verse which feeds into a big cry of “Hail to the King, King Romeo, Hail to the King, Nobody knows.” A second chorus feeds into a delicious guitar solo, that flows into and continues under a final smash of the chorus. Check it out in the video below:

And both were preceded by debut single Dead Man, which is also an absolute banger. A funky guitar riff opens up, then continues under engaging vocals that end “You don’t know my name, My middle name is danger, I can see the venom in your eyes.” A little guitar riff feeds into the chorus of “I can see the dead man walking away.” Check it out below:

We had a chat with guitarist Lars and frontman Tor Vidar to find out more. Read on below…

GR: Who are King Romeo?

LF: “We are a rock band from the south of Norway. Our singer was asked to do a gig in the summer of 2018 and said ‘yes’ before he had a band. We got together and did the show as King Romeo, playing a mix of covers and some quickly made originals. Shortly after our drummer had to prioritise differently, and Kniksen (a more traditional rock drummer) took his place. We have a great musical chemistry and decided that the band would be more than just a one-off. And that’s how King Romeo was formed.”

GR: You just released Flames. What should people be expecting from the song?

LF: “Flames is a highly energetic song, and we’ve focused more on a solid vocal melody and a catchy chorus than loads of guitar riffs. However we do have a more ‘proggy’ instrumental part towards the end. Finally our drummer got to use his double-kick!”

We believe Flames is the perfect work-out song, but also a tune that’ll make your head bounce in the car and be amazing live. We have actually performed it live, but it is a lot cooler now!”

LF: “Our sound is deeply rooted in energetic riff-based rock, at the same time it’s super important to us that our music is more than just intensity and a wall of noise – we care about melodies and want our fans to be able to sing along and here the definition in what we do… even though we’re not a ballad band…”

“I guess there’s inspiration from the classics like Metallica and AC/DC, but we do not feel bound to a specific genre, and our future releases might sound quite differently. Our main inspiration as a band is just to have a good time – I know it sounds like a cliche, but we just love to play rock together.”

LF: “I does most of the instrumental writing, but everyone has a say in it. My inspiration comes from the joy of being able to write something I’d love to listen to myself. It truly is a blessing being able to produce something that makes yourself and hopefully others happy and energized.”

TV: “The lyrics are about how I view life and the world. «Flames» is an image on how the wrong people often control the masses – and how we are pulled in different directions. If we open our eyes to it, there’s a lot of injustice… the battle between good and evil.

“I also get inspired by more everyday stuff like seeing a person on the street, and my head just creates a storyline. Music, literature and movies also inspire me.”

Lars: “Metallica, System of a Down and Kvelertak.”

GR: We’ve featured loads of great new Norwegian bands lately. What are your thoughts on the current rock/metal/punk scene in Norway?

LF: “I think a lot of young musicians have been inspired by Kvelertak’s recent success. Seeing them tour with Metallica, and playing their awesome stuff for the big masses is just so friggin’ cool. Rewind the years, and Norway only really had a black-metal scene that got international attention, but it’s getting better. I mentioned Kvelertak, but bands like Moron Police, The Good The Bad and The Zugly, Spidergawd and The Dogs, to name a few, are making a cool rock scene in Norway.

“We even have Norway’s oldest rock festival, the brilliant Fjellparkfestivalen two minutes from where me and Erling live. We also have to mention the Norway Rock Festival, where we played last year. It’s in our neighbourhood, and has featured artists like Gary Moore, Motorhead, Twisted Sister, In Flames and a ton of other legends. These festivals have been a huge inspiration to us.

“The support for up-and-coming bands is getting decent. Some of the festivals does an awesome job, but I’d love to see the public system appreciate what playing in a band means for young kids (and us in our thirties).”

GR: What have you got coming up through the rest of 2020?

LF: “Some time before Christmas we’ll release our 4th single. And we’ll share that title for the first time ever here. It’s called Our Monster, and we cannot wait to show it. All of our songs are produced by Thomas Gallatin – an amazing musician, producer and person.

“We’d love to play live, but due to Covid-19 some of our gigs got cancelled, and we’ll focus on writing and recording music – as well as being active online in 2020. At the moment we are writing more modern metal (Trivium landscape) and that’ll be super interesting in the studio, but we haven’t made the final plans yet.”

LF: “We have released three songs, and according to our Spotify numbers Dead Man is our best song, so be sure to check that out. But of course we hope that Flames can beat it, and become our biggest hit so far. We appreciate everyone who checks us out.”