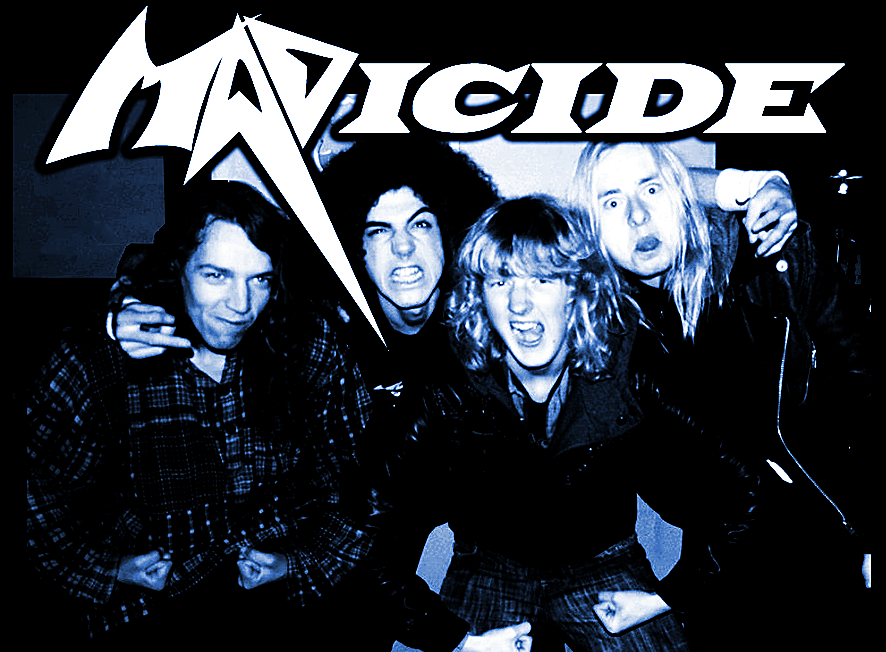 A GigRadar first for you today as we bring you our very first Welsh thrash band in Madicide, who first terrorised the unsuspecting villagers of Glynneath some ten years ago. After a fairly lengthy hiatus the band is back and ready to relaunch their thrash invasion on the world.

The quartet, like most thrash bands we suspect, started out under the influence of gallons of Jägermeister, practiced their brand of thrash very loudly at unruly times of night, and generally created havoc in their small South Welsh hometown.

However, come 2015 and the band took a break that came to an end in July of this year. They’ve put the enforced free time we all now have into working on new music and have a new single and a debut album coming our way next year.

For a taste of what to expect, the band sent us latest single, the 2020 version of Death March, which offers up classic thrash riffing and powerful vocals. It opens up with a drawn-out riff then a cool ascending riff drops into chugging chords and bass with big smashes of bass drum over cries of “Death march.”

Gruff thrashy vocals come in and feed into cries of “Death march, March until you die.” That drops into the cool stabbing riff that feeds into a second verse of “Nuclear fallout, All hope is lost it’s apocalypse now, Anarchy today, March with me and I will make you pay” and another chorus.

It then drops into slower chugging guitars under repeated cries of “March,” which ends on a drum roll that ushers in a massive guitar solo that ramps the pace right up again. The fun riff returns as the solo gives way to a final verse and chorus. Give it a listen here:

We had a chat with frontman Ceri Roberts to find out more. Read on below…

CR: “Haha – well that’s a bit of a long story, first let me say thanks for having us as it’s obviously a pretty shitty time for everyone at the moment!

“So we started back in 2010, I’ve known Josh Bevan (Bass) since primary school but we weren’t exactly what you’d call ‘friends’ until the last year of comp – before then he was just the annoying ginger kid in the year below who used to constantly hassle me to start a band. Eventually I said yes and found out that he also worshipped Metallica, a few gallons of Jägermeister later we’re making music together. Unfortunately it was shit music as we’d both only just started playing our instruments but it was a good laugh! At first, I was playing the drums in our yet-to-be-named band before I convinced my best mate Jack Williams (drums) to take over while I started on rhythm guitar (and attempted vocals).

“We then took over the shed in Jack’s garden as a practice place, found a lead guitarist Chey Currie and proceeded to entirely piss off the entire village of Glynneath by playing ridiculously loud thrash metal at unreasonable times and causing around 9,000 drunken incidents including; ‘crashing’ a wedding, drunkenly devouring a darts club buffet, starting a fight with the next town’s rugby team and many far worse things involving drink and drugs. It was awesome.

“For some reason, Chey ended up leaving amongst all this (no idea why?) and we were once again without a lead guitarist. Luckily we’d been regularly visiting the local Indian restaurant in our 17 year-old drunken states and trying (unsuccessfully) to get off with the girl behind the counter, who turned out to be Ian Woolfe’s girlfriend and, instead of telling him to give us a well-deserved beating, she told him we were looking for a guitarist. Ian showed up at the shed, he was a mind-blowingly amazing lead player (to us drunken amateurs anyway) and Madicide was born (blame Jack Williams for the name!).”

GR: You just released Death March. What should people be expecting from the song?

CR: “I was stoned and drunk at Josh’s place and I woke up at 4am with Apocalypse Now on volume 99 on the tv. In my fucked-up state it really felt like I was there and kinda freaked me out – I then read a bit about the Bataan Death March during WW2 and that influenced the lyrics anyway. It’s not the deepest song ever but it’s got a certain energy.”

GR: How would you describe the Madicide sound to people that haven’t listened to you yet?

CR: “That’s tricky because sound is invisible, unless you play it loud enough (or take acid).”

CR: “Just anything that we find cool at the time really. I write most of the lyrics and some are based around books (especially Stephen King or Chambers – anything horror related, the stranger the better) – some are just made up concepts, like our new single Carnivore Incarnate is just a nice solution I came up with for the overpopulation problem.”

CR: “Ian loves Pantera, Arch Enemy and loads of weird classical stuff and blues bands, I’m into a lot of the newer thrash bands like Shrapnel & Evile, we all love the big four thrash bands… Motorhead, Onslaught? Just all the bands really. Oh, and Pink Floyd.”

GR: What have you got coming up through the rest of the year and into 2021?

CR: “So, we’re just working on returning from a five-year hiatus (since 2015) and putting everything in place for our next single to be released and then our first full album. We didn’t see the point in coming back unless we can get things done properly this time around. Although Covid-19 has been pretty much entirely shit, it has at least given us enough time to practice and plan things properly.

“We’ve had a new logo designed by Christophe Szpajdel (aka: Lord of the Logos) who is a really nice guy and has worked with loads of great bands including Emperor, Enthroned and Metallica! He even did the logo for the Nic Cage film Mandy so we’re obviously excited and very lucky to get to work with him, we’ve also had professional cover art made this time around (by Steven Yoyada) which makes a change from all the old crap that looks like it was made on Microsoft paint!

“We’ll be in the studio as soon as lockdown rules allow it and release our next single followed by the album in early 2021, assuming of course that we’re not stuck in lockdown until 2033 which, with Trump and Boris around, wouldn’t surprise me.”

CR: “We have five brand-new songs already made for the new album and they really are a step above what we’ve released so far. We’ve had time to live with our material long enough to know what works and what isn’t needed this time around. There are also a few surprises in there that are very different in tone to what we have done in the past, the new material is a mixture of quite intricate almost classical, progressive stuff and then the complete opposite – it’s basically more extreme with a great deal of variation & lots of rare ingredients like a good noodle soup!”