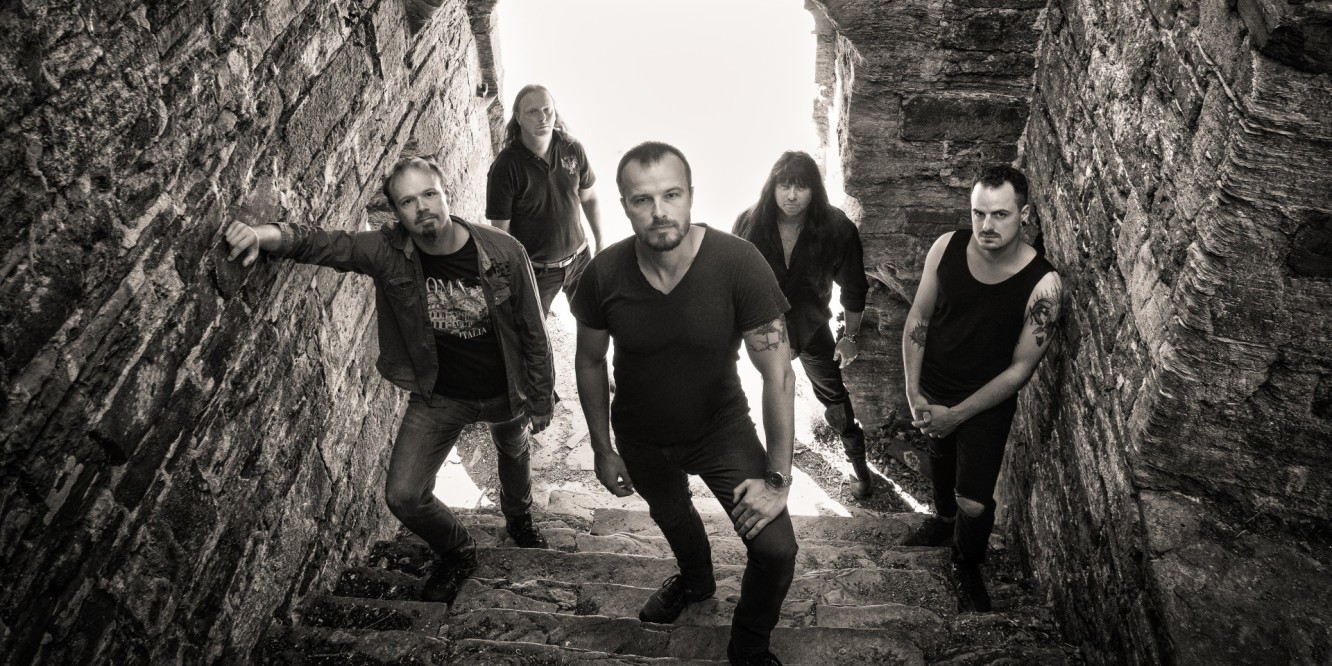 Get your weekend off to an epic start with the powerful metal sound of Thorium, who hail from Belgium and the Netherlands. The band harness the energy of traditional power metal and heavy metal with thrash and progressive influences in a sound that you can’t help but be enthralled by.

Thorium was founded in 2017 by guitarists Tom Tee and Dario Frodo and bassist Stripe, who were all previously in the legendary Belgian band Ostrogoth, which was part of the NWOB(elgian)HM scene. In that band, they had a lot of materiual they weren’t able to use so started a new band, brought in fellow Belgian drummer Louis Van Der Linden, then completed the Thorium lineup with Dutch frontman David Marcelis.

As David tells us: “Between them the five band members have more than a century of experience playing music in bands. However, we each bring in very different qualities and also some different flavours in musical direction, the blend of which feels very natural. Also the Belgian-Dutch mix adds a nice twist because it is the source for many internal jokes, but also gives us a foothold in both countries.”

And that century of experience shows in the fantastic sound of Thorium. As David explains: “Thorium plays metal with a high dose of 80s and early 90s referrals. Although the overarching sub genre may be traditional heavy metal, we like to mix things up with a wide array of influences, ranging from European and US power metal, to Bay Area thrash, to progressive rock and metal.

“The key characteristics of Thorium songs are that they are usually catchy and easy to get into, but to the attentive listener they contain layers upon layers of treasures beneath the surface, both musically and lyrically. There is something in there for almost everyone, but at the same time no single song is generally considered to be particularly weak.”

Our latest taste of this is the excellent Exquisite, which is both exquisite by name and by nature. It opens up with a quick descending lick that gives way to an almighty powerful high-pitched scream over heavy drums and stabbing guitars. The lively instrumentals continue as David’s engaging vocals take over in a powerful opening verse, which feeds into a cry of “Exquisite, It feels exquisite.”

That flows straight into a second verse that ends with repeats of “Exquisite, It’s called exquisite” and ends on an impressive high note. A stabbing guitar lick takes over, which develops into an absolutely huge guitar solo supported by pounding drums. Another verse and the chorus vocals bring this massive track to a fittingly heavy ending.

On the track, David says: “We’ve received much praise for this track, in the same line as for our previous video singles Where Do We Go and Empires in the Sun. After a year of lockdowns, live concert restrictions and postponed album releases due to COVID-19 it is clear that people are dying for new, energetic and optimistic music. Especially Exquisite has this kind of Gamma Ray-feel that gets you smiling on a sunny spring day while banging your head and driving your car at 100 miles an hour on the German Autobahn!” Check it out for yourself in the video below:

Exquisite is the opening track from the band’s album Empires In The Sun, which was released at the start of last month. The album is packed with metal goodness, including the excellent Where Do We Go, personal favourites The Old Generation and Winterfall, which features an awesome guitar solo that drops into a dark, powerful outro. And the album goes out in real style with an 18-minute long trilogy of tracks – including an absolutely epic 13-minute middle track 1302 – The Golden Shadow that’s littered with delicious guitar licks and solos – focusing on the historical events of the year 1302 (more on that later.)

On the album, David told us: “The title refers to the knowledge that nothing lasts forever, a fact understated by the rise and demise of the historic empires of the world. The album cover illustrates this theme with a beautiful painting by Velio Josto depicting many monumental buildings from the heydays of the Egyptians, Romans, the Mayans, many others, and of course… the Flemish.”

And when it comes to musical themes, David explains: “Most of our music and lyrics are written by guitarists Tom and Dario. Both of them are often inspired by historical themes. The new album, for example, contains an 18-minute piece concerning the events of the year 1302 when the Flemish guilds (the working class) rebelled against the French rule (the nobility). This work is made all the stronger by the contributions of several guest vocalists, such as Arjen Lucassen (Ayreon), Joe Van Audenhove (Evil Invaders), Benny Willaert (23 Acez) and Anneleen Olbrechts.

“Tom and especially Dario also like to deal with other lyrical themes, such as personal development and experiences in life. In that sense, life is a source of inspiration in itself for which music is a driving force.”

Thorium are the latest in a string of exciting Belgian bands we’ve discovered. On the scene, David tells us: “Belgium is only a small country, and many of its bands may be small in international fame, but very large is musical quality and personal charisma. There are various areas in Belgium which I would consider true hotspots for metal music because of the bands and musicians originating from there, but also because of the wide fan base and large number of festivals, clubs, webzines and so on. The province of East Flanders where Thorium hails from is one such area.”

On the back of their album release, Thorium are keen to get on the road and get their new music out to people. As David tells us: “The pandemic is obviously having a huge effect on (the lack of) touring and concerts, but also on the ability to meet as a band, especially as we work cross-border. But luckily the Internet and social media help to keep in touch with each other and with our friends and fans. Hopefully the situation will be better during or at least after the summer and I hope that we will be able to start touring again in the Benelux and all over Europe. Our bookers at IDVI Agency area already working on this!

“In 2019, Thorium has been in the UK a few times playing gigs in the South and in the Midlands. We’d love to come back as soon as Covid (and Brexit) allow us! In the meantime, we’re promoting our new album Empires in the Sun and the band is already writing songs for the next studio albums. One thing is for sure, Thorium will be a name to be reckoned with for the years to come.”

If you’re a fan of power metal, powerful vocals, big riffs and ripping guitar solos then Thorium are very much the band for you. So go and give their superb new album Empires in the Sun a listen!