Exciting Danish metalcore newcomers ARCHON have created a stunningly heavy, atmospheric and experimental sound that they describe as being “brutal, mellow, ambient and graceful.” That forms the perfect schizophrenic mix, with clean vocals played off against brutal screams and huge riffs and crushing ryththms countered by moments of calm and synth ambience.

The Aarhus quartet of vocalist Sofus Nielsen, guitarist Kresten Maigaard Axelsen, guitarist Jonas Larsen and drummer Jeppe Bo Kibsgaard knew each other from the Danish metal scene, but began when Jeppe and Jonas met at a concert in 2018 and began discussing the idea of a band.

As Jonas tells us: “I felt really lucky when Jeppe was up for the idea, because everyone knows how difficult it is to find a drummer nowadays! We quickly started searching for more band members and, after some time posting in forums on social media, we found Sofus. He’s a great singer and a technical genius, so we felt he brought a lot to the table. Shortly after, we found Kresten, also through social meida. We had a few guitarists auditioning for the band, but the pick fell on Kresten due to his technical level and his personal character. He was just the perfect match for us.”

And on the sound they’ve honed since, Jonas adds: “We like heavy riffs, spacey and
ambient effects, melodic choruses, and electronic elements. We also like to experiment a lot,
so our new material might vary a bit from our current songs, but it’s certain that it will be just
as bangers.”

They’ve since released two singles ahead of their upcoming debut EP. Our first taste of ARCHON was their huge debut single Dark Grounds, which features Andreas Bjulver Paarup from fellow exciting Danish band CABAL. It starts out with eerie synths over powerful guitars and drums before smashing into a wall of intense screamed vocals, huge groovy low-tuned guitars and crushing rhythms. That explodes into a massive atmospheric chorus that starts with high-pitched vocals answered by a screamed response in the lines “I keep running in circles, Breeding demons in my head, Telling me nothing is worth it, Cause I won’t get to try again,” before screamed vocals “Time fleets and I never got a grip I’ve lost, But I still sit here and wish, I’m sickened by the way it makes me feel, Cause I don’t know what to make of it” take over.

Stabbing techy guitars jump in before a huge scream over relentlessly heavy low-tuned guitars and drums. It powers into another huge verse led by brutal vocals, which flows into another intense chorus, which repeats then drops into booming guitars over the eerie synth sound. Screamed vocals “With every breath I take, A piece of me fades in the air, Like it’s nothing” come in to bring this amazing debut single to a close. Check it out in the video here:

That was followed by Gloom, which was released last month. It opens with a darting guitar lick over heavy guitars and rolling drums, which kick into faster drums and a huge smash of heavy vocals and pounding guitars and drums. That drops into a building synth sound that flows into a powerful chorus of high-pitched guitars answered by screams “Fade away in the gloom we know, We’re sick of the premises, Of living in misery, So why keep alive what’s lost its purpose, No resolution in stagnancy,” which ends with a moody section of synths and twisting guitars.

A second verse sees big screamed vocals answered with stabbing guitars, then clean vocals “The sun goes down and the sky lights up, A voice too loud consumes the stars like clouds, And keeping the silence won’t ease the violence, Now it lingers like a ghost” drop into a rare amount of ambience before flowing into a big chorus. The clean vocals return over a cool darting guitar lick and gives way to big guitars and vocals that bring the track to a heavy ending.

On the track, Jonas told us: “Gloom is one of our favourite songs from our upcoming EP. It’s one big metalcore banger! It’s fast, melodic and heavy. The reception has been positive. We’ve only expected what you can expect as a new band with only two songs out. But people seem to like it! If you like Polaris, or Architects, you will definitely like this one!” Check it out here:

Both tracks come from their upcoming debut EP, which has been mixed and mastered by Chris Kreutzfeldt, who’s also worked with fellow Danish bands CABAL, Møl, Ghost Iris. And they’ll be releasing a third single Playing The Victim, which features Mathias Rønde Uldall-Jessen the frontman of another Danish band Royal Deceit, tomorrow (May 28).

And on the EP, Jeppe says: “The biggest challenge in making this EP was not writing the songs. It was to be content with what we have achieved. We are all very detail-oriented with different opinions, but we have learned to reach 90% agreement, and that has sort of become our mantra while creating our upcoming debut.”

The ARCHON sound is heavily influenced by bands like Polaris, Architects, Bad Omens. And on what inspires them to write music, Jonas explains: “We like to write music that reflects what we are going through, or what the current world situation is etc… We don’t really like to go full-on writing about political topics, but neither do we write about broken hearts or love themes. Our current songs are about mental illness and what it feels like living with it. We want people, who are dealing with the same stuff, to be able to relate to the music and maybe discover ways to cope with it.

In a more process-related context, we all contribute to the writing process, whether it be riffs, drums, lyrics, composition or something else. I come up with many of the main riffs or basic ideas, and then we play around with them until we either decide to release them as an EP, save them for a future project, or scrap them entirely. We have numerous ideas laying around, so we’re not about to run out of material anytime soon.”

The band have already collaborated with some of the biggest names in Danish metal, so we asked them for their thoughts on their local scene. Jonas said: “Let me put it like this: The Danish metal scene is very small. The good thing about it is that we all kind of know each other. Also, most of the bands have signed with the same management (Prime Collective), so eventually, we will bump into each other. Another positive thing about the Danish metal scene is that we all support each other and help make the scene grow locally and internationally with tours together, giving each other shoutouts etc…

Bigger bands like Cabal and Mirza from SIAMESE have been amazingly helpful to us. They believe in our ambitions. It’s all about the connection between the bands and how we can help each other. We all have different things we are good at, so it’s beneficial for us all to help each other out wherever we can. In broad terms, there’s no competition between us. We’re all fighting for the same cause.”

ARCHON release their third single Playing The Victim tomorrow (May 28), with which they promise “some cool stuff.” They’ll also have more playthroughs for their tracks ahead of the full EP release later this year. They also hope to have live shows later in the year and a lot more new music to come on top of that.

We’ve featured some great new Scandinavian bands over the last few years, including the likes of personal favourites Knogjärn, Set Before Us, Once Awake, FooN and Naga Siren, but ARCHON are right up there with the best of them. We love their fusion of brutal metal with ambient, atmospheric moments and we’re excited to hear more from them with the release of new music in the build up to their debut EP.

You can follow ARCHON on Facebook and Instagram, and check out their music on Spotify, Apple Music, Deezer, Soundcloud and Tidal. And listen to more new Scandinavian music in our brand new Spotify playlist! 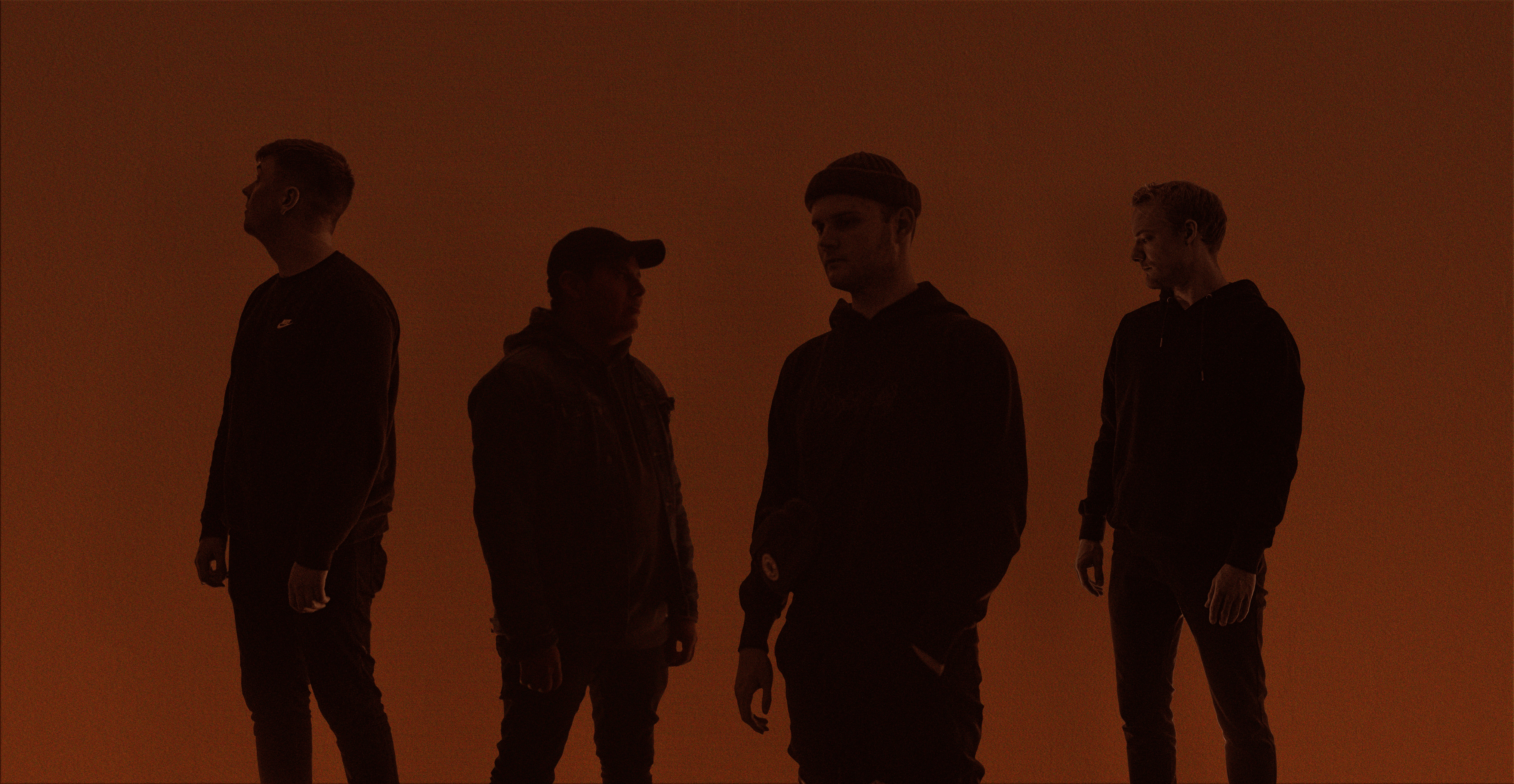