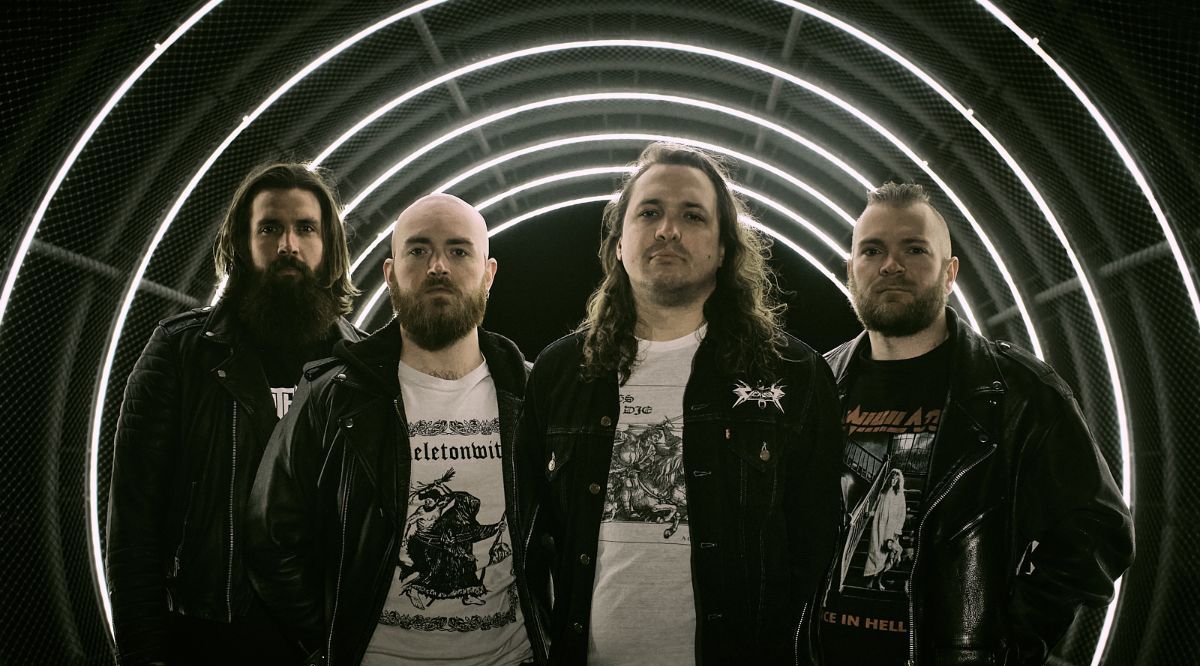 Transport yourself back to the days of 80s thrash and death metal and strap in for an exploration into outer space with Danish/American ‘hyperthrash’ collective Terminalist. The Copenhagen-based band fuses black metal blastbeats, death metal growls and prog elements with sci-fi and philosophy in a sound they describe as “fast, aggressive and intellectual.”

Terminalist started out in 2018, when lead singer and guitarist Emil Hansen and long-time housemate and drummer Frederik Amris decided to start a more serious band. They brought in guitarist Morten R. Bruun then completed the lineup last year with Kalle Tiihonen, who despite the sound of his name is the American element of the band, on bass and backing vocals.

On the sound they’ve honed, Emil tells us: “An 80’s thrash outfit, a death metal growler and a philosopher enters an escape pod and venture into outer space.

“Or maybe more fleshed out: We’re rooted in 80s thrash of the more technical kind, but mix it up in vocal delivery, blastbeat drum patterns and in the riffing department, which implements elements from black and death metal. To top it off, we spin a philosophy of speed and acceleration into the sci-fi-fueled lyrical universe. Hence, we call it ‘hyperthrash.'”

Our latest taste of this hyperthrash sound is debut album The Great Acceleration, which was released early last month and despite only having five tracks comes in at well more than 35 minutes in length.

Perhaps the focal point of the album is the epic 11-minute-long third track Invention of the Shipwreck. It opens up with dramatic drawn-out guitars, which are soon joined by intense blastbeat drums then a piercing guitar lick. That all drops into light guitars then an atmospheric section as powerful guitar chords join in and the drums speed up.

It suddenly explodes into brutal screamed vocals and relentless drums over spacey guitar sounds. That drops into a cool fast-paced riff as the intense vocals continue. The vocals give way to a lively darting guitar over faster drums then a cool spinning guitar lick, which feeds into a return of heavy screams.

A little “bleugh” scream gives way to ascending guitars then a cool riff under heavy vocals, as a wild spinning guitar joins in and takes over in a frantic solo. It feeds into heavier guitars and drums, which come to an abrupt ending and resume as the screamed vocals return and drop into a big stabbing guitar section. And the track concludes with a more atmospheric section of drawn-out guitars then a cool laid-back lick. Give this huge track a listen here:

Also on the album is the lively Terminal Dispatch, which opens with lively guitars, a little scream, then a stabbing guitar riff over heavy drums. Growled vocals take over alongside stabbing guitars, before a cool darting riff feeds into another intense verse. A funky guitar jumps in and is swiftly replaced by the stabbing guitar chords before a slower second solo comes in over heavy guitars and drums to wind the track down. Check it out in the video here:

While the first single released from the album was Relentless Alteration, which you can check out in the video below:

On the album, Emil told us: “It’s our own little monster of a brainchild and we’re immensely proud of the result. Of course we hope listeners and metal fans will like it, but whether people respond positively or negatively is less important, as long as it elicits a reaction.

“People can expect an ambitious, progressive and modern metal record rooted in the thrash tradition with enough outside elements to challenge the genre’s boundaries.”

The Terminalist sound has been heavily inspired by sci-fi prog thrashers Vektor, along with older prog thrash bands like Coroner, Anacrusis, and Oblivion and classic bands such as Metallica, Megadeth, Testament, Slayer and Whiplash. They also take influence from death metal bands like Death and Atheist, along with newer black metal acts like Behemoth and Mgla.

And when it comes to writing music, Emil explains: “In the lyrics department, the French philosopher Paul Virilio’s concept of dromology, a theory of speed and acceleration, has had a huge impact on the band and our universe. It also seems to translate really well into our hyperthrashing style.

“To Virilio, the speed of technology, especially weapon technology, drives the world forward through acceleration, leading towards the dromocracy, the modern (and/or future) high-speed society in which speed is the law. But technology also inherently has a destructive side which is rarely illuminated when talking about scientific innovation, inventions, and progress. He is quoted for saying that ‘the invention of the ship was also the invention of the shipwreck’ which is a central theme on the record and also the basis for one of our lengthy songs.

“Virilio’s thinking is interesting on its own but also incredibly quotable in a metal context, as when he for example writes that ‘history progresses at the speed of its weapons’ systems,’ that revolution is ‘the politics of overdrive’ and so on. Writing songs around this theme and even including a couple of quotes on the record was easier than having to start from scratch – and it has also resulted in a more consistent record, I believe.”

Expect Terminalist to be “promoting the shit” out of the new album, which began with a release show in Copenhagen alongside local blackened hardcore outfit Throwe. They’re also working on new material that will be released at some time in the future.

“Also, please note that while we do put an emphasis on the concept and philosophy behind this record, it is important to stress that the music was written to hold up on its own. If you don’t care for proggy concepts and such, you can still get your thrashin’ on and slam down a case of beers while listening to this album.”