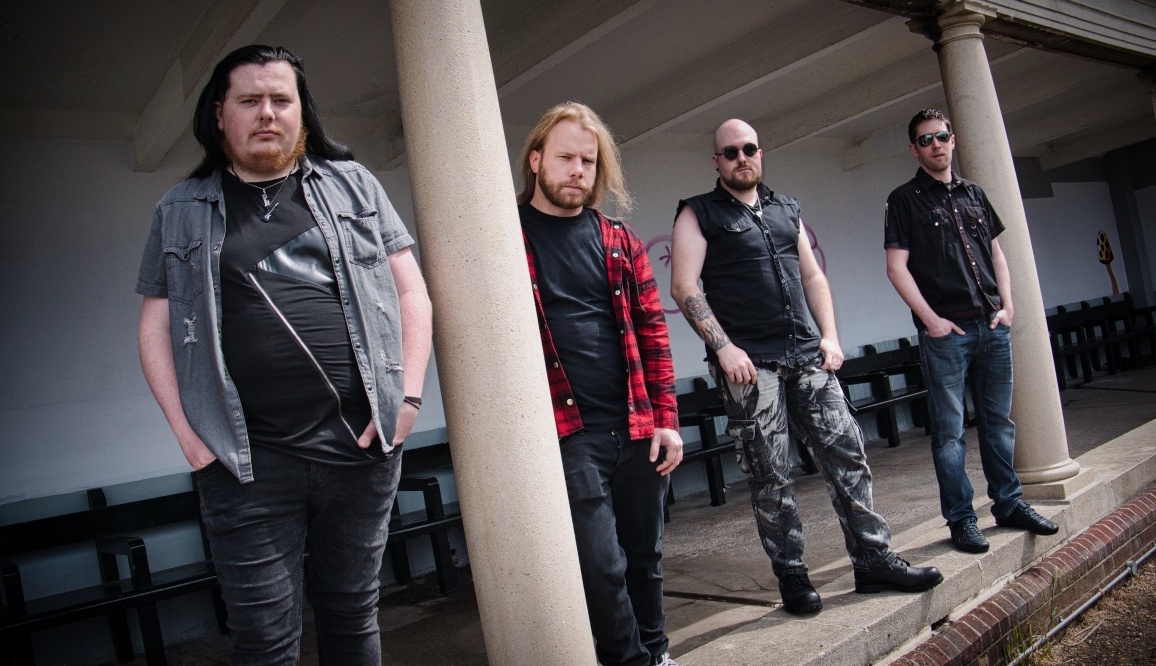 Brace yourself for industrial metal “unlike any other band out there” from Essex-based newcomers Parrilla. The band has honed a thrilling fusion of industrial metal and 80s style electronic elements in a sound they describe as “melodic, heavy and danceable.”

The quartet of started out when David Page (drums) found Dani Messmer (vocals and guitars) on Join My Band. They eventually discovered Chris Howell (bass and backing vocals), who originally started out filling in on guitar, followed by Luke Megran (guitars and backing vocals). The quartet now live in Southend-on-Sea but Dani is from Switzerland and Chris is originally from Germany.

And the band tell us: “Since then the band has become far more organic than what it was at the start and has clicked with a solid focus to write and release music we want to hear.”

Our first taste of the band’s intriguing sound was recent single Mannequin Complex, which starts out slow but bursts into a huge scream over a driving riff. A very 80s sounding verse sees heavier vocals kick in before a pre-chorus line of “Is this what you want to become, a mannequin with a complex? Tell me is this what you want or this just what you’re told be?” That feeds into repeating, almost spoken vocals over guitar chords and a cool synth sound.

Heavy guitars take over and drop into a more intense second verse, which feeds into another chorus that drops into a light section. That ends on a vicious scream, heavy guitars and electronic noises before a final chorus.

On the track, they told us: “The reception has been absolutely stellar, we couldn’t be more proud of it. It’s been our first original release with this line up and its first music video – this was also a first of filming a music video for Chris and editing for Dani. Besides what we say with everything we make ‘Expect the unexpected,’ we would say get ready for that neck brace because you’re going to get mad whiplash from headbanging to this tune!”

The track is taken from the band’s brand new second EP Femme Fatale I: Ensnared By Venus, which was released on Friday (July 30). The EP is packed with more of the same industrial intensity but plenty of diversity. It begins with lively opener Law of Texas that fuses twinkling electronics with searing synth sounds, crushing riffs and brash vocals in powerful choruses. More of the same follows later on the intense Desire but things are mixed up a little on Bleed, Cry, Pray, Die and the more melodic closing track Femme Fatale, which is pushed forwards by driving guitars and drums supporting engaging vocals.

Also mixing up the styles is the dark and moody Show Me, which sees eerie whispered vocals and synths burst into big guitars. The whispers return and feed into an intense chorus, which ends on a synth line and electronic noises. Check it out in the lyric video below:

On the EP, the band told us: “We’re very excited for people to hear what we have been working on during lockdown and to join us in this first chapter of the Femme Fatale journey. What people can expect is Industrial Metal unlike any other band out there. We have combined many of our influences in this record, some are more obvious than others, but the end result is that every song is widely different from the last while still sounding like Parrilla.

“The way this EP differs from the last is very much the collaboration of it, the last EP was just Dani and David writing it while this time everyone in the band has been heavily involved from start till finish, on top of that this record is far more aggressive and bigger than Dancefloor Messiah.”

The Parrilla sound has been inspired by the likes of Nine Inch Nails, Static-X, The Prodigy, Rammstein, KoRn and Depeche Mode but their individual tastes are fairly diverse. On the guitars, David is a big fan of Led Zeppelin, In Flames and Slipknot while Dani is into Frank Zappa, Pain, Lindemann and more. On rhythm, Luke loves Muse and Enter Shikari and Chris is “a massive Trent Reznor fanboy” so loves Nine Inch Nails plus Red Hot Chili Peppers, Mayhem and Megadeth.

Or, as the band put it: “If you like heavy music with electronic elements thrown in then this is your jam and we welcome you into the fold with open arms.”

And on what inspires them to write music, they add: “Everyone in the band is pretty different when it comes influences. On this record we cover being the victim of domestic abuse, the longing of a loved one told in an audio visualisation of a space opera, the tongue in cheek exaggeration of sex (only slightly of course), obsessions of wanting to be beautiful and attempting to replace real feelings with superficial ones and so on.

They may have just released their new EP, but there’s plenty more to come from Parrilla. They’re currently in the process of trying to get gigs booked in and are on the lookout for opportunities to play live. They’ve also been busy working on the next two EPs to complete their Femme Fatale trilogy, which they hope will be completed and released by 2022 and sound even more intriguing.

As the band explains: “We won’t rush it since we are trying things out that are sounding really freaky which are translating well in the songs and the effect we are trying to achieve with them. We want to do this full time and are fed up having to wait for it. That would be nice but all in all what we want is people to check out our music and hopefully it will make you feel as good/understood as us making it that is what truly matters.”

Listening to Parrilla feels, to me, a bit like a nostalgic nod to when I first got into bands like Pitchshifter and Static-X about 20 years ago. They hone industrial intensity, chunky riffs, catchy electronic elements and engaging vocals, which means there’s plenty to like about this exciting new band. And, if you like something a little bit different, then check out their industrial take on Nirvana’s Breed.