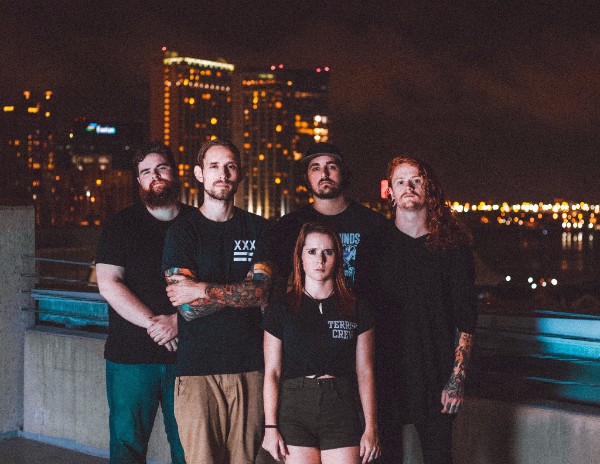 Baltimore hardcore quartet Sharptooth have given us another teaser of their awesomely heavy sound ahead of their debut album launch next Friday, with today’s release of No Sanctuary.

No Sanctuary is even heavier than the previous track we covered in our Introducing article, Clever Girl. It opens up with reverby noise then diving into low-tuned chugging guitar chords supporting Lauren Kashan’s huge screamed vocals – which are insanely intense throughout.

That is until the chugging riffs end with a long low guitar note, then drop into a spoken vocal section: “Every single second that you spend creating hate, Is another lie, Another life that wasn’t yours to take, So if you think your words are harmless tell that to those who are dead, Every time that you say faggot is a bullet through my head.” That last line echoes, then repeated screams of “bullet through my head” lead the track to a heavy chugging guitar riff outro. It’s mighty heavy stuff.

As is becoming customary with Sharptooth, the song touches on issues that affect society – in this case, the use of homophobic slurs. As Lauren explains: “This song is about us as LGBTQIA people telling the rest of society how you can and cannot talk to us, and the insidious ways that language shapes the way people interact with and treat each other. The lyric ‘Every time that you say faggot is a bullet through my head’ directly illustrates how hateful slurs and rhetoric lend credence to homophobic views, and negatively impacts the way the world treats people like me.

“It’s a slur that’s been used against me personally, and against all of the members of this band, queer and straight alike, and it feeds directly into a cycle of hate that has the potential to manifest as violence against us, and other members of the LGBTQIA community.  People say “sticks and stones will break my bones”, but words can and do directly impact our culture and the ways that members of different groups are treated. We can ALL work together to be more mindful of the way we communicate with each other so as to create a safer world for all people.”

No Sanctuary is taken from Sharptooth’s upcoming debut album, Clever Girl, which is released on 27th October via Pure Noise Records.