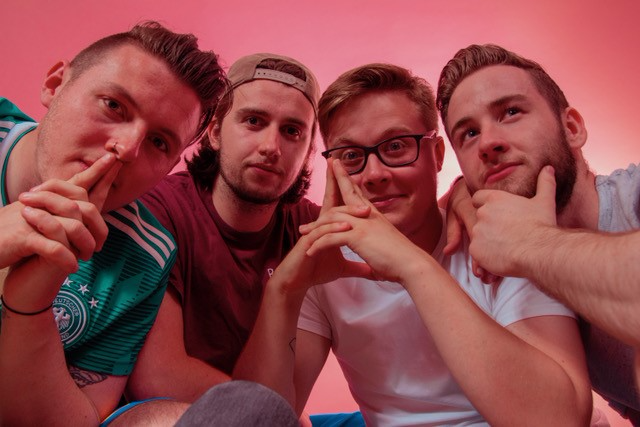 Glasgow’s WRTHLESS take all the fun and energy of pop-punk and fuse it with rockier influences, meaning they’re far from your pop-punk norm.

As lead guitarist Stuart Macdonald tells us: “That is exactly how we would also describe WRTHLESS. I’d love to say this was a conscious decision to not sound like the pop punk norm, but the truth is that we all have quite different music tastes, and when this was all blended together, WRTHLESS was the outcome. We think we’re a really good smoothie of pop-punk from the late 90’s and early 2000’s up to pop-punk bands today. We try to go for big melodic choruses, we try to go for sad boi lyrics, we try to play fast and aggressive. I think we’re a pop-punk band that your mum and dad might not hate.”

The quartet, completed by the ‘three J’s’ Jordan Daly (guitar and lead vocals), Jamie Balsillie (bass and vocals) and Jonathan Mollins (drums), went to school together then formed out of the ashes of a former band that helped them quickly gel as WRTHLESS.

Stuart tells us: “I think we all just have a massive love for music and our actually playing our instruments. We’re all quite creative and we’re all a bit weird in our own wee special ways, so music is a brilliant way to express that. All our heroes are musicians, and we want to be like our heroes.”

The most recent taste of their engaging sound is Give Me A Reason (To Be On My Own), which was released in August. It kicks off with a smash of vocals supported by big guitar chords, then drops into laid-back vocals “Take your time, Form a line” as gradually building palm-muted chords lead into a hit of vig chords and drum rolls, then more angsty vocals “Fuck what you’ve started and leave me alone, You’re callous, you’re spiteful, Go find a new home, Give me a reason to be on my own, Is this what you wanted, is this what you sold.” The contrast between loud and quiet is really fun, with gradual build-ups making the loud smash-ups and chorus even more enjoyable.

As Stuart tells us: “It was a bit quirkier than our debut single Home, which was quite poppy. But aye, people seem into it. For anyone who hasn’t heard it yet, I’d expect for it to be a bit different than a normal pop-punk tune. It pops and then dies a lot in the song, so it catches your ear quite a lot.” Check it out in the video below:

While debut single Home is a bit more punky, opening up with a really cool fast-paced high-pitched guitar intro that dives into a singalong verse, then a chorus of drawn out vocals “You don’t need me anymore.” Huge drum rolls and guitar chords lead us into a second verse that’s driven forward by pounding drums then a return of the fun opening guitar lick. Check it out in the video below:

As they allude to, the WRTHLESS influences are pretty wide-ranging. From the obvious likes of Blink-182 and Green Day through to The Story So Far and Belmont, Creeper, SWMRS and Modern Baseball, and the likes of The Gaslight Anthem and The Clash. It all forms a sound that’s punky and edgy with an intriguing rockier and melodic element to it.

And in terms of what inspires them to write music, Stuart adds: “We recently came to a kind of realisation that we write a lot about observing other people’s lives. We don’t necessarily write super personal songs, although there are some very personal subjects in them.”

WRTHLESS tell us they have a bunch of new songs recorded and ready to go, but in the meantime you can catch them live in Glasgow with The Hostiles next Friday (12 October) and at The Bungalow in Paisley on 1 November. More info on all their gigs is here.

One Reply to “Introducing: WRTHLESS”